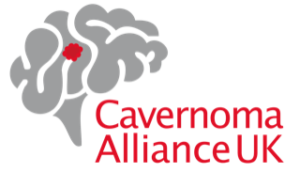 What is a cavernoma?

A cavernoma is made up of abnormal blood vessels and can be found in the brain and/or spinal cord and looks like a raspberry.

A cavernoma is made up of abnormal blood vessels and can be found in the brain and/or spinal cord and looks like a raspberry. Cavernomas are also known as cavernous angioma, cavernous haemangioma or cerebral cavernous malformation (CCM). They can measure from a few millimetres to several centimetres. A cavernoma can get bigger, but this engorgement is not cancerous, and does not spread to other parts of the body.

Sometimes the cells lining the blood vessels ooze small amounts of blood (inwards) within the cavernoma, or (outwards) into surrounding tissue. The risk of re-bleeding varies widely and is difficult to predict accurately.

Cavernoma also occur in other areas of the body, such as the spine. 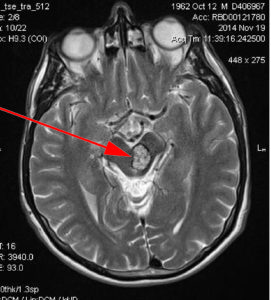 People who experience symptoms are considered to have a rare condition. An ongoing study based on the entire population of Scotland, found that each year, 1 person out of 400,000 is diagnosed with a symptomatic brain cavernoma. This means that every week, in the UK, another 3 people are diagnosed.

A minority of cavernoma (less than 30%) are thought to be a genetic form and genetic testing can be used to determine whether the cavernoma has a genetic cause or is likely to be random.

Some cavernoma are diagnosed after investigation into other symptoms not definitively linked to cavernoma. These are known as ‘incidental’ cavernoma.

The type, severity, combination and duration of symptoms vary, depending on the location of the cavernoma. Single or multiple cavernomas near the surface of the ‘hemispheres’ or ‘lobes’ in the brain can cause epileptic seizures.

Symptoms may occur after a ‘bleed’ but this is not true in every case. MRI scans are the most reliable diagnostic tool available to determine the presence of cavernoma. It is important, however, that specific scan sequences are used: “T2-weighted” and “gradient echo” (also known as T2-star).

Other diagnostic tools include CT scans and angiography but often these scans cannot be relied upon to show a cavernoma.

Whilst people with cavernoma have things in common, each person remains unique. This should be taken into account for each individual who may require both lifelong support and medical attention. Because cavernoma symptoms can vary widely from person to person, depending on location, number/ size, effective treatment options can vary also. Specific medical advice can only be given by a neurologist, neurosurgeon or other clinical professionals.

Nowadays, diagnosis of cavernoma is invariably made following an MRI scan.  What happens next depends on the size and location of the identified cavernoma(s) and the severity of your symptoms. There are currently three main ways of treating cavernoma:

There is yet no high-quality evidence for which of these three treatments is optimal for people whose symptoms are so severe that immediate treatment is essential. For this reason, our medical advisor Professor Rustam Al-Shahi Salman is leading a major programme to find out. CAUK is the patient partner in this programme, known as the Cavernomas A Randomised Effectiveness (CARE) trial. The CARE Trial programme started on 1st September 2020 and ends in August 2022.  There will be a regular news bulletin on progress elsewhere on this website.

There are many exciting treatment developments in the pipeline, e.g. developing drugs to reduce the risk of a bleed, to anticipate a bleed with blood or urine samples and more.  We will have regular updates on progress in these area in our News and on the Research pages.

Questions to Ask your Neurologist or Neurosurgeon

If you have an appointment to see a neurologist about your cavernoma it can sometimes be difficult to remember the questions you wanted to ask or know what questions to ask!

Some people find it useful to have a list of questions to take along with them to the appointment. We have prepared some questions, hints and tips at the link below.

Questions to ask your Neurologist or Neurosurgeon

Want to keep up to date with all the latest at CAUK?

Join CAUK today to gain access to our support services and free events.

© Copyright 2020 Cavernoma Alliance UK. All Rights Reserved
CAUK does not endorse any form of management or treatment for cavernoma, nor any medication. Any individual's treatment, management or medication should be discussed with your doctor (GP, clinician) or other health-care provider​.